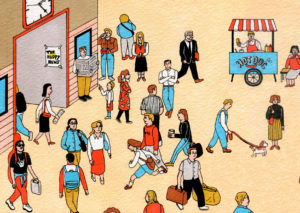 The headlines call this ‘The Age of Loneliness’. They say it’s a major public health issue. A silent epidemic that’s starting to kill us. But we don’t want to talk about it. No-one really wants to admit they are lonely. Award-winning film-maker Sue Bourne believes loneliness has to be talked about. It affects so many of us in so many different ways and at so many different stages of our lives. So she went out to find people brave enough to go on camera and talk about their loneliness”. – BBC

‘The Age of Loneliness’ documentary aired on BBC (in the UK) at the beginning of January and I believe it’s something that should be addressed across as many platforms as possible. The documentary gave a very honest and thought-provoking twist on a matter which we’re often made to believe we shouldn’t approach, after all it’s not a very British thing to talk about our problems.

However, since doing what I do… what ever it is that I actually do, I’m not exactly sure but I sometimes help in very small ways when people are going through difficult times. Whether it’s through the happy things I create (The Happy Newspaper!) or the letters and scribbly notes I write, the happy boxes and jars I fill… Strangers often contact me to say thank you or to tell me their story and how I’ve helped in the tiniest way or to tell me about a friend or family member going through a really difficult time – Which is quite bizarre but equally wonderful.

I guess it’s strange to me because I don’t think I do or say anything that’s unusual or that we all wouldn’t be able to say to our best friend on their very worst day, but I’ve found that maybe it’s sometimes easier coming from a stranger who’s completely detached from a situation… Who knows nothing about you or what you’ve been through and won’t judge you. I’ve only been doing this (what ever ‘this’ is) for a couple of years now, I recently turned 23 and I haven’t been through even a fraction of the things that people have told me about and I am incredibly grateful for that. However, I do know what it feels like to feel great sadness… We all do. We’re all human and we all have horrible things to deal with – no matter what stage of life we’re at – but it seems it’s not always ’right’ to talk about it. It’s sometimes easier to put on a brave face and act like everything’s okay rather than face the agony of talking about it, even to those closest to us.

One thing I’ve noticed above anything else over the past year or two is that it’s not a specific ‘type’ of person, not a particular gender or age of person who has contacted me… As you’ll see if you’re able to watch this documentary – Over the Christmas period the media were heavily focused on loneliness in elderly people, which is often what you’d typically think of if somebody mentioned ‘loneliness’ – but it can happen to anyone. We will all know at least one person feeling this way right at this second, and I bet that more often than not it’s the person you’d least expect.
Be aware of those around you, know that the person walking past you in the street or sat next to you on the bus may have had the worst day, or week… or year. That friend who went through hell and back a few weeks ago, ask them how things are.

Be kind and smile, because we’re all riding this roller coaster we call life and we will all have points where we may want to get off.