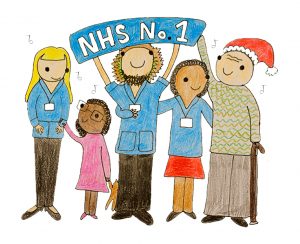 Last December, in a competition for the title of Christmas number one, Justin Bieber backed the Lewisham and Greenwich NHS Choir for the top spot.  Addressing his followers, Bieber said that:

The NHS Choir single was 7,000 sales behind Bieber’s single “Love Yourself” – but in the 24 hours after he tweeted, the difference for the single had dramatically reduced to being only 662 sales behind.

The charity single “A Bridge Over You” was a mash up of Coldplay’s “Fix You” and Simon & Garfunkel’s “A Bridge
Over Troubled Water” and aimed to spread the message of helping people. The tweet from the Canadian singer boosted the charity sales by an incredible amount and after expressing that letting the NHS Choir win the top spot was the right thing to,  Bieber tweeted: “It’s Christmas. Good luck.”