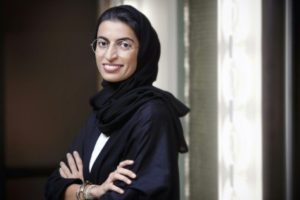 Nura bint Mohamed al-Kaabi, who was appointed as a new minister to the United Arab Emirates’ Federal National Council

The United Arab Emirates has shown its dedication to the contentment of its people by appointing Ohoud Al-Roumi as its official Minister for Happiness.

She is the former Director of the Council of Ministers Office, but the newly created post means she will now be given the task of shaping government policy to create “social good and satisfaction” according to a tweet from the ruler of Dubai, HH Sheikh Mohammed. He also added “ It is the beginning of a new journey of achievement and giving to
the people, and we ask God to help us serve and take care of them”.

UAE was already 20th on the 2015 World Happiness Report, but it seems as though they are still as keen as ever to nurture and raise the spirits of their people. Personally I hope this provides another successful example of modern
democracy and that other countries follow suit. In addition to this, a Minister of State for Tolerance post was also created to “promote tolerance as fundamental value in UAE society” and given to another eight of the female members of UAE’s 29 members of Parliament. Focusing on happiness and tolerance can only be a bonus for the greater good, so huge Congratulations to the two ladies for being promoted and entrusted with such important tasks and well done to The United Arab Emirates government for their attempts to create the happiest society possible.